“My name is Aris Moro and I’ve a question,” starts Aris Moro, with a question. “When I was younger, my football coach asked me if it were possible for a team to score two back-to-back goals with no opponent touching the ball in between. In Fifa ’05 it was not possible, and that’s the reason why younger said ‘no’. Then he continued to describe to younger that one team can score a goal right together with the referee blowing his whistle right after the goal was scored before halftime, then begin from kick off and score. It sometimes happens afterward. But has it ever occurred?”

It’s truly as several readers have e-mailed to point out. Let us head back to 23 September 2000. The Tamagotchi craze was over, the Sydney Olympics were in full swing, French Euro pop duet Modjo (Hear Me Tonight), and Peterborough United were welcomed by Wycombe Wanderers for a mid-table Division Two battle to Adams Park.

The first 45 minutes was pretty uneventful, but Jun Cullen brought back on the boundary of the area Wycombe’s Steve Brown. Upward stepped Jamie Bates, who crashed the free kick in the Peterborough goal through the wall and previous Mark Tyler. Referee John Brandwood immediatel blew his whistle before Posh had opportunity to restart. Halftime, 1-0 to the Wanderers. 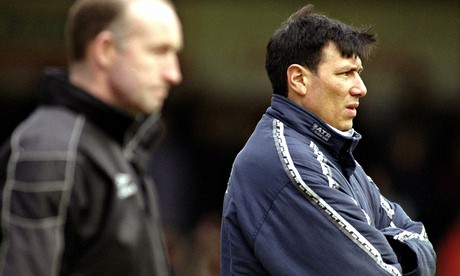 Following the period 23-year old Jermaine McSporran headed right for the Peterborough goal and kicked off for the house side. The defenders, caught napping, allow the striker through on goal and he calmly slotted past Tyler to double the edge. Two goals divided by nine seconds and with no resistance touching the ball.

Wycombe would go on to conclude 13th but the season proved to be a memorable one: it was they reached the FA Cup semifinals under Lawrie Sanchez. It’s possible for you to also read more about that effort in this bit to both Unfortunates site and there is a longer match report on the Peterborough game here.

“Upon musing at the tendency of football managers having their initials on their coats or tracksuit tops, I wondered if any manager was replaced with another who has identical initials, so saving the cost of new matchday attire?” pondered thrifty Ed Ginzler last week.

There have been. Gareth Southgate, for instance, was replaced by Gordon Strachan at Middlesbrough, though as Pete Scarborough points out: “I am unsure if Gareth’s coat would have fit small Gordon, though.” And as Tom Pringle includes: “It was a little fictitious market in the kit initials though, as Strachan carried on to spend every penny in the piggy bank on dross before being fired himself a year later.”

That does appear to be a motif – the savings on matchday clothing initials appear to be often offset by spending (general failure or) elsewhere. “Wolves did just this in March 1994, replacing popular but small stalwart Graham Turner (two promotions on a shoestring, Steve Bull, Sherpa Van Trophy) with Graham Taylor (stagnation, attempted to sell Steve Bull, Turnip),” writes Phil Russell. “Although given the transport budget squandered on the likes of Tony Daley, Mark Atkins, Steve Sedgeley etc Steve can not envision price economies were high on the program when he was made.”